Last Match of the Season

Aberystwyth's B team had their last match of the season on Monday 18th April, a repeat of the previous week's contest against Gwyddbwyll.com, with both teams unchanged. On board one I got revenge for last week's defeat by Iwan Griffiths, though not in such fine style, winning a pawn and taking control of the ending. John lost an exchange against Owen Llywelyn but had some compensation for it, and might have played on but for a mistake at the end. Ian had an easier win than last week's against Tegwyn Jones, winning a piece with a queen fork, with mate to follow soon afterwards. Finally Tony had a harder game than expected against the lower-rated Emyr Llywelyn in a congested English Opening, but eventually managed to push his passed pawns through and trap his opponent's king on the back rank. 3-1 to the B team, who finish with four wins and can be pleased with their first season, while the A team also did well, finishing a close second to the reigning champions, Cardigan A.

Four club members took part in the Welsh Championships in Cardiff over the Easter weekend. In the Championship itself, Rudy scored 2½/7, a disappointing score by his standards. In the Major Open, Julie scored 3½/7 and I scored 3/7, while in the Minor John's 2½/6 wiped out the rating gains he'd made in an excellent early part of the season.
Posted by Matthew Francis at 08:22 No comments:

With just a few matches to go in the Dyfed League, it is clear that Aberystwyth A have fallen short in their bid to dethrone Cardigan A as League champions. Aber have beaten Cardigan in both their head-to-heads, but dropped too many points in other games. On Wednesday 13th April, Aber's opponents were Carmarthen, who, as so often this season, were fielding some strong players but not quite enough of them. On Board 1, Rudy played a Dutch Defence (his national opening) against Gerry Heap but allowed a devastating invasion by the White queen. He wriggled ingeniously but succumbed in the end. David lost a pawn against Huw Morcom's Sicilian, won it back, then seemed about to lose the ending before his opponent went wrong and allowed the draw. Julie's game against Paul Orton also swung backwards and forwards, and in the end a draw seemed the right result. With Carmarthen defaulting on Board 4, the match ended 2-2.

As the season draws to a close, the B team now have their third win of the season, this time against Gwyddbwyll.com. Aber also had the rare luxury of a home match actually played at home - that is, the St David's Club. (Nearly all our matches are played at The Emlyn Cafe, Tanygroes.) On top board I experienced the mixed emotions of a player on the receiving end of a fine combination. Iwan Griffiths showed great coolness and precision in calculating his attack. John seemed under some pressure against Owen Llywelyn's Caro-Kann, but the players agreed a draw in a position where White still had to tread carefully. Ian picked up a piece early on against Tegwyn Jones and played very cautiously thereafter; he was only beginning to look confident when his opponent lost on time. Finally, Tony played a strong positional game against Emyr Llywelyn seizing control of most of the board and taking material when the chance arose. 2½-1½ to Aber.

At last I am able to conclude the report on the Club Championship. Georgina and John played their game on the next available club night. Georgina's Bishop's Opening produced a balanced position in which she gave up a piece for no real compensation. Nevertheless, she continued to press and reached the ending with John still unable to find a clear win; he offered a draw as he was low on time. That left just Julie and Rudy, who played on the evening of the B team's match against Gwyddbwyll.com (report to follow). I cannot describe this opening: the first move on each side was a Pirc, but heaven knows what the rest of it was. It didn't work out well for Julie, at any rate, as her pieces were forced back on to the first two ranks, allowing Rudy to choose his time and method of attack. This he did with some panache, breaking open the kingside with a bishop sacrifice. 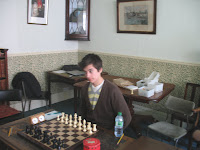 So the Club Championship is completed, and we have, as reported earlier, a new champion in Mark Talbot, who finished with the excellent score of 6½/7. Rudy came second with 5½, I was third with 5, then came Julie (3½), Tony (3), John (2), Georgina (1½) and Ian (1). Once again it was a really enjoyable championship, with some good fighting games and a few upsets. The system of playing the games over a weekend, which we were only trying for the second time, works very well, and playing in spring rather than winter made it easier to keep warm! Many thanks to Tony for organizing it. The full-size pictures can be seen here.

John finished his tournament in style with a fine example of an attack on the queenside-castled king against Brenda Miles. His form has been excellent this season. Ian, who had a disappointing tournament, had an up-and-down game against Jan Sendall; in the end they agreed a draw with Ian a pawn up, but subsequent analysis shows Jan could have won. Georgina is another player who has made great strides recently; against William Fairbairn she had kingside pressure for a while but allowed her queen to be trapped. In the Open, Rudy's results were below his usual standard, but he finished well against Huw Morcom, patiently besieging a blockaded position and then invading at the right time. Julie's performance was about par, though she is never satisfied with that. John Waterfield took control of the game with his strong central pawns. I didn't put up enough of a fight in my first Open, and here, against the other backmarker, Dave Conolly, we agreed a quick draw. It was eleven moves rather than the one move Rudy has on record, but there is not much point in posting it either way.

The Aberystwyth and Cardigan teams are pretty used to each other by this stage of the season. On Monday 4 April it was the B teams, fairly closely matched on paper, playing each other. On top board Cardigan's Howard Leah got his revenge against me for an unlucky defeat earlier in the season. I allowed my bishop to be imprisoned; the position was still double-edged but my defence was difficult in time-trouble and Howard found the winning combination. John Basterfield looked to have chances on the kingside in a Ruy Lopez but allowed his centre to be undermined and dropped several pawns. Ian Finlay, in an unorthodox Sicilian, got a vulnerable passed pawn at e3 and was determined to hang on to it, even sacrificing a bishop in the cause. When it finally dropped he was two pawns up in the ending and managed to secure the draw. Tony Geraghty's game against Nick McIlvenna was full of enterprising play by both sides. Tony had rook against bishop in the endgame, but dropped a pawn unnecessarily and was glad he still had a draw. A fairly comfortable victory for Cardigan, 3-1.

On the last morning of the congress, John missed a chance for a breakthrough against Scott Hammett's English Opening, and the players agreed a draw in a position where Black still had the advantage but no clear win. Ian might have trapped Alan Spencer's queen, but got another opportunity to win a few moves later and made no mistake. Georgina was presented with a gift when Tom Bennett left his queen en prise. Rudy was faced with Bird's Opening, which he plays himself, and the kind of complex manoeuvering game in which he usually excels, but somehow it didn't work out for him against Chris Dixon. Julie allowed the game to be opened up with her king still in the centre, and suffered the consequences. I became pessimistic early on in my game against Mal Kingman, although the position was not at all bad; I started throwing pieces at him in a vaguely aggressive way, losing material with no compensation.

In the Minor, John sacrificed a piece for two pawns against Howard James in an attempt to break through against an insecure-looking king, and they agreed a draw in a complicated position. Ian's game was, I think, a Yugoslav King's Indian (or a Modern Benoni by transposition?); he miscalculated an exchange combination and went a piece down, a bad result for him against a lower-rated opponent. Georgina's attack quickly overwhelmed Alan Spencer, whose handling of the opening showed inexperience. In the Open, Rudy, like Ian, lost to a player he would have expected to beat - in a blocked position he went for a queenside attack but an uncharacteristic oversight caused his position to collapse. Julie won three pieces for a rook against Guy Wagner. Never one to be content with a material superiority, she sacked the other rook, then won an exchange. It was one of those games where you have to keep counting the pieces to see who's ahead on material. Fortunately it was Julie, who had picked up a few pawns in the process and had a won ending. I got a strong queenside attack against Roger Greatorex, and, after looking in vain for a quicker win, settled for a double-bishop ending a pawn ahead. It was fairly easy, but a combination of depression about my results so far, lack of confidence in my endgame skills and the opportunity to watch the second half of the England-France rugby match induced me to accept his draw offer.