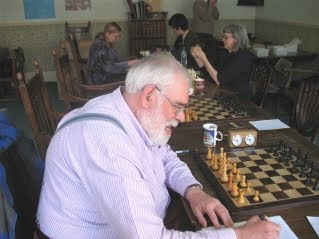 We had the sad news this week that longstanding member of Aberystwyth Chess Club John Basterfield had died after a long illness. John was the first person I met on joining the club nearly eight years ago; a big man with an imposing presence, he was in fact softly spoken, courteous and unfailingly good-humoured, even in later years when he was often in poor health. Before retirement he had been a maths lecturer at Aberystwyth University, and he still had the teacher's mannerism of a slight pause before answering a question while he sorted out a measured and appropriate reply. As a player, he had a solid positional style and an unchanging opening repertoire: e4, the Winawer French and the Nimzo-Indian - if you were playing White and John hadn't pinned your knight on c3, it could only be because you hadn't put it there. Although he was not often able to play for the club in the last few years, he was still capable of some strong performances, including a shared first prize with clubmate Ian Finlay in the Minor section of the Dyfed Open in 2012. When not able to play he liked to attend events to support his friends, and indeed John seemed to have chess friends all over Wales. He will be much missed by us all.

Thanks to Rudy for these two annotated games, which, as he says "seem to exemplify John's careful and persistent style, always to be taken very seriously, no matter by which opponent".

Colin Denham of Haverchess has put his own tribute, and another of John's games, here.

Meanwhile, the new season has started, and the fixture list is now up on the right.

Posted by Matthew Francis at 14:46 No comments: