Merry Christmas and a Happy New Year to all. For my last post of the year, I present the most recent games in the Aberystwyth Club Championship. No big upsets yet (and not a single draw), but special mention must be made of Jamie Friel, who held the much higher-rated Adam Watkin-Jones for a long time, and had drawing chances.

Aberystwyth A's plan against Cardigan in our match at the St David's Club on Tuesday 8th December was to get draws against the formidable players on Boards one and two, and win on the other boards. It didn't quite work out like that. Rudy van Kemenade, black on top board, looked for activity against Howard Williams by advancing his kingside pawns, but that only left weaknesses behind, and by the time Rudy had plugged those he was facing a devastating passed pawn. Adam Watkin-Jones, on the other hand, played his Bishop's Opening solidly, and was undaunted by Iolo Jones's endgame technique as he scored an impressive draw. Julie van Kemenade miscalculated a combination against Tony Haigh, and found herself a rook down. She played on for a bit, trying to take advantage of his exposed king, but without success. I missed a succession of chances as Awne Osinga dug in to defend against my Vienna Gambit; it was one of those nights when I couldn't see anything over the board, possibly still stunned by the exceptionally hot Flaming Dragon curry I had just eaten at Wetherspoon's, and in the end I accepted his draw offer. A 3-1 win to Cardigan was not what Aber had planned.

There was one more game in the Club Championship, a win for Jamie Friel.

Posted by Matthew Francis at 16:33 No comments:

I have just noticed that I overlooked one of our matches in my recent blogposts. This was the match between Aberystwyth B and Haverfordwest B on Monday 23rd November at the Emlyn Cafe. On top board, I was facing an opponent who had won all our previous games, Martin Jones. My English system against the Sicilian gave me a comfortable position, but winning the exchange turned out to be something of a positional trap, as he had a well-placed knight and the two bishops while my white-squared bishop was more or less useless. Unable to find a way through I agreed to a draw. Tony Geraghty's game had a nail-biting finish, when Scott Hammett sacrificed a piece for attacking chances. Tony should have been able to win, but his time was running dangerously low, and both sides overlooked Scott's potential mate in two. Somehow the game was drawn with only seconds on Black's clock. Mike Weston had broke up Gwyn Evans's kingside and gave up a knight to force mate on Board 3. Meanwhile, on bottom board there was another missed mate, this time for Ray Greenwood against Georgina Gray, who recovered from her danger to take advantage of the exposed White king, winning what was her first game for the club this season.This almost lost encounter resulted in a 3-1 win for Aber. 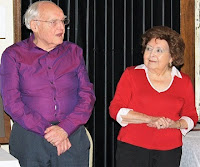 We had the sad news recently that Roland Spencer had died at the age of 84. Roland was a stalwart of the Dyfed League, and served as its treasurer for many years. He also ran the annual Dyfed Congress in Fishguard, always a highlight of the Welsh chess year, and it was a moving occasion when he retired from this role in 2012. As a player he was unorthodox and tricky, always at his most dangerous when defending with his back to the wall. Roland was the first opponent I ever played in a Dyfed League match, and we had many battles over the years. Away from the board the ferocious determination vanished, and he was urbane and charming. There is a tribute to him on the Welsh Chess Union website.

On Monday 30 November, Aberystwyth B played a depleted Carmarthen at the Emlyn Cafe, Tanygroes. Playing Black on top board against Paul Orton, I had a stroke of luck such as I had not known since my Latin O Level more than forty years earlier. On that occasion I arrived at school without realizing the exam was due and revised two passages of text at the last minute, both of which came up in the paper. This time, I found myself in a line of the Scandinavian I had played the night before on the internet and subsequently looked up in David Smerdon's superb book on the opening. Nevertheless, the game became very hard for both players once we were out of the book, and we had little time left when it ended in a win for me after only 23 moves. Mike Weston was also short of time at the end of his complicated game on Board 2 against Robert Narayan-Taylor. Although the ending was now won for him, he settled for a draw, which seemed a fair result after some mistakes on both sides. Ian Finlay had a tough opponent in Richard Thomas, returning to the game after many years, but still a strong player. Ian weakened himself too much on the queenside and in the centre, leaving a technical win for white. With the default by Carmarthen on bottom board, the result was 2½-1½ to Aber.

Meanwhile the new-format Club Championship is continuing. Here are the latest games.