Aberystwyth Chess Club is now closed for the summer. The next club night will be Tuesday 2nd September.
Posted by Matthew Francis at 11:37 No comments:

Aberystwyth A are the new Dyfed League champions, having beaten Cardigan A by a mere half point. With two matches to go, it couldn't have been closer. Aber A were to play Carmarthen, while Cardigan A would play Aber B. The strong Carmarthen team were one player short, a handicap which had also applied to their recent match against Cardigan A. The match was played at the Emlyn Cafe, Tanygroes, on Monday 2 June. On top board, Rudy van Kemenade went all out to attack Gerry Heap, despite having Black, sacrificing the exchange to create complications. Though the position was double-edged, it is always harder to defend against such an onslaught, and Rudy scored an impressive win. Julie van Kemenade had the advantage all game against David Buttell's Sicilian, but found it hard to break through in the blocked position. Reaching an ending with opposite-coloured bishops where she was still winning, she was happy to take a draw as the match was already won. On third board, I had managed to equalize against Paul Orton's Ruy Lopez, after a shaky start, and took the initiative in the rook and pawn ending, winning for the first time against this opponent. With the default, that made the final score 3½-½ to Aber A, clinching the championship with a match to spare. 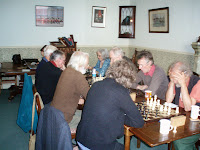 The early victory was just as well, because Cardigan A were on outstanding form for their match against Aber B at the St David's Club on Thursday 5 June. Julie did her best to stay in the game against FM Howard Williams, sacrificing material to try to get chances against his kingside, but he defended coolly to claim the point. I survived a long time against another FM, Iolo Jones, who played patiently, trusting his superior endgame technique. With both players running out of time, he scrambled to a win in an entertaining finish. Like Julie, Tony Geraghty sacrificed to obtain counterchances against Tony Haigh, but he gave the material back for a winning ending. On fourth board, Ian Finlay dropped a rook trying to defend against Howard Leah's attack. 4-0 to Cardigan A still wasn't enough to retain their championship. 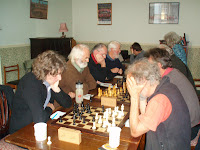 Meanwhile, the club championship has also been decided. Congratulations to Rudy, who wins with a 100% score. Three more games are are below. Julie's games against Tony and me are still to be played, but with nothing depending on them and the summer break due to begin, they may not happen.