Rounds 2-7 of the Aberystwyth Club Championship took place at the St David's Club over the weekend of 12-13 March, 2011. Cai Lewis, who had played in the first round the previous week, was unable to take part, allowing the remaining eight players to have an all-play-all (though a couple of games would be left over for the next week). Here is the report of Saturday's play. 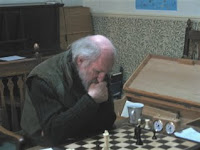 Rudy van Kemenade against Georgina Gray was a Ruy Lopez, Bird's Defence. Rudy took control as expected, but surprisingly missed a chance to win a piece. He got a nasty pin instead, which she failed to break. Mark Talbot unexpectedly chose Alekhine's Defence against John Basterfield and was outplayed in the opening. Finding himself a pawn up against the stronger player but beginning to come under pressure, John offered a draw, which was declined, and Mark went on to win the ending. Julie van Kemenade also varied from her usual repertoire in her game against me, playing a Philidor. I had the advantage for a while but allowed it to fizzle out and the draw was agreed. Tony Geraghty's win against Ian Finlay was the only result to go against grading, as Tony worked up a powerful kingside attack from his London System. He missed several easier wins, but eventually won the ending. 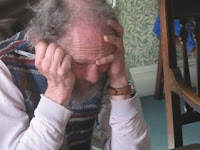 The key game of Round 3 was between the two highest rated players, Rudy and Mark. Both Petroff specialists, they met in their favourite opening, and Rudy, playing Black, got the advantage. It came down to a knight versus bishop ending, where Rudy missed several opportunities, and eventually they agreed a draw after more than 80 moves. I won a rook early on against Georgina Gray in a Sicilian. Tony was bemused by Julie's unorthodox treatment of his French and soon lost the thread of the position. Ian agreed a draw against John in a complex Nimzo-Indian position where he was in fact winning. 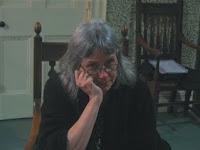 In Round 4 the two current leaders met. Mark played a Sicilian, his fourth defence to e4 in recent games. I had my chances but was eventually outplayed. Ian found himself on the receiving end of the Queen's Gambit for once. Rudy won a pawn but had to work hard for victory. Georgina lost material early against Julie's Philidor, and her attempts at counterplay were futile. Tony and John played a quiet London System game and agreed an early draw.